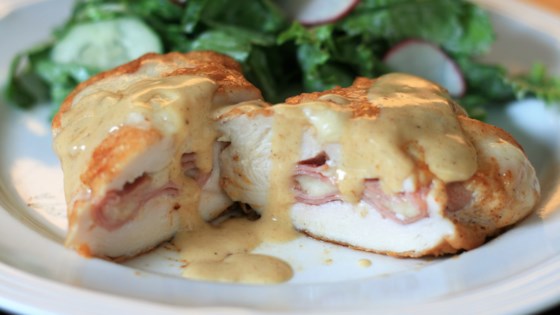 This is very good — but I’d recommend a few changes. First, pound the breasts to half-inch thickness at least (this will let you reduce the 30 min cook time to about 15, max). Then, reduce fat a little by using half butter and half olive oil when you brown (3 tbsp. of each). Oil will keep the butter from burning, too. Third, if you want to eliminate wine, just use 1/2 cup chicken broth (from a can, if needed) — or just use salted water. No big deal. Last, when I blend the cream at the last stage, I like to add about 1/4 cup fresh chopped basil to the mix — serve with chopped fresh basil on top, too – or substitute whatever herb you like (fresh is best, but only add it last).

I made a few changes to this recipe. First, I brushed the chicken with egg and rolled in breadcrumbs instead of flour. Second, I fried the chicken in butter for about 10 minutes until it was nicely browned, then I put it in the oven at 350 for another 20 minutes. Instead of simmering the chicken in the sauce, I whisked the cream,wine, bouillon and cornstarch in a bowl, then simmered it for about 10 min. alone, and spooned it over the chicken. It turned out fantastic. My fiancee` said this was the best dish I ever made, and he’s more of a beef man. Thank you!

I have to add my 5 stars to this one. I scaled this recipe to 24 for a holiday dinner. All ages LOVED this meal served with rice pilaf and roasted asparagus and quartered bella mushroomsi. I recommend an oven roasted, no water added ham, and a good quality wine. After making this again recently, I learned that even a small chicken breast, after pounded and filled, is too large a portion. My 6 adult guests could only eat half of theirs. Going forward, I will slice this into 1 inch rounds (much prettier, too) as pictured in photo number 26. Thanks, Behr.

Not to beat a dead horse, but this dish was fantastic. 4 kids ranging in age from 13 to 7, my wife and I ate the whole thing. I decided to prepare the chicken with an egg wash and bread crumb mixture added the paprika to the bread crumbs and a pinch of garlic powder. Pan fried in 3 tbs. of butter on all sides and stuck the pan in a 350 degree oven for 20 mins. Prepared the wine, butter and bullion in a saucepan. Mixed the cornstarch and heavy cream in a separate bowl and added to the wine mixture, stirred with a wisk until it came to a boil and thickened. Sliced the cooked chicken into 1 inch rounds and topped with sauce and fresh parsley. Served with steamed veggies and noodles and a side salad. This will be on the table the next time my in-laws and other dignitaries come to town. Bob

Followed the recipe exactly and it came out perfect! It was wonderful !!! I did however use deli sliced ham and wrapped the cheese up in it so it would not melt out during cooking. See my photo’s – Yummy !!! I will definately be making this again and again. Note: Do NOT sub half and half for heavy whipping cream. You will also want to double the sauce – because it is soooo good – Thank you for sharing your recipe

This is an excellent recipe, but I still prefer the look and texture of finishing it in a 350′ oven. I use the “smokiest” ham I can buy and spread a little dijon inside the breasts before rolling (the “classical” recipe). I also tie the breasts both ways with orange kite string in small bows. They hold together well and look nice. (And the string never gets lost.)

This chicken is awesome. I exspecially like the white wine sauce. I’ve tried it with many different wines, and i liked it best with Sauvignon Blanc. Serving it over rice and asparagus makes for a deliciously unified and well-rounded meal. I just tripled the wine and boullion after i took the chicken out and let it cook off a little, then added triple the whipping cream and triple the cornstarch, plus a little paprika for color. Some people point out that the swiss melts out of the chicken, which can be solved by wrapping the swiss in a few thinnly-sliced pieces of ham. This is one of my favorite meals, and it’s amazingly easy!

Tastes like the fancy restaurant version. This is wonderful, Behr! The only thing I changed was to substitute 3T garlic flavored olive oil for the butter. Used cooking string rather than toothpicks. Doubled the sauce so we could have some with our steamed aparagus. This wine sauce is out of this world! Next time I’ll try rolling the chicken in Panko crumbs.Thanks for sharing.

FANTASTIC chicken recipe!!!!! I’ve made it several times and the only thing that I do differently is doubling up on the sauce. Which by the way, is out of this world! Try it, I think you’ll be very happy you did! Bon Appetite!

my sauce curdled and was thin and runny. taste was good though